From the RuneScape Wiki, the wiki for all things RuneScape
(Redirected from Mort’ton)
Jump to: navigation, search
The Old School RuneScape Wiki also has an article on: osrsw:Mort'ton

Mort'ton is a village situated in Morytania, south of the Mort Myre Swamp. The town was once famed for its funeral pyres, though now it is populated by afflicted, strange zombie-like creatures that are the result of a disease which spread through the town some time in the Fifth Age, infecting the population, and Shades of long-dead spirits which were disturbed by the town's affliction. The town has a general store and is the start for the Shades of Mort'ton quest. To the north of the town lies the Flamtaer temple, which is where players play the Shades of Mort'ton minigame. If you are doing the Shades of Mort'ton quest, it is recommended for players to go to world 88 (since that is the world for Shades of Mort'ton, hence more likely to have players there to help) to build the temple. Barrows can be found just east of the town. 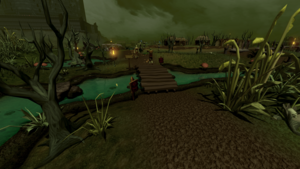 The entrance to the afflicted town. 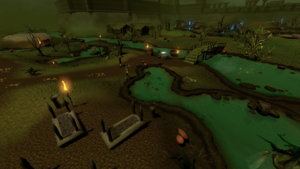 The path leading to the Barrows.

Mort'ton is located in the southern reaches of the region of Morytania. The town lies directly south of the vast Mort Myre Swamp, and can be reached two ways by the player. One by foot, walking through the swamp and through the winding paths south of the swamp, reaching the town from the western entrance, or by using the shortcut shown to the player by Veliaf Hurtz through Canifis' Hair of the Dog tavern's cellar, and then via the Swamp Boat from The Hollows, taking the player through the majority of the swamp and letting them enter through the east. This path requires completion of the quest In Search of the Myreque.

After the completion of The Branches of Darkmeyer, drakan's medallion can be used to teleport to the Barrows to the east, or Burgh de Rott to the south, which are only a short run away. 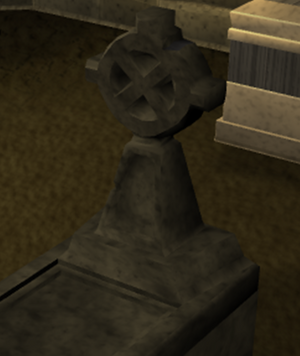 Mort'ton's early history is largely unknown. The land it occupies was part of Hallowvale during the Second Age, although it is unclear if it was the site of any significant settlement at the time. The ruins of a temple, known as Flamtaer, dedicated to elemental power is found at the village's north end pre-date the modern settlement by some years, although it is unknown when or how it originated.

Mort'ton was initially a market town well known for its pyre funerals. By using the natural caves underneath the town as tombs, Mort'ton became a centre for burials and was famed for its funeral pyres, which are still present in the town today.

Some time after the Year 23 of the Fifth Age, a series of unnatural mists entered Mort'ton from the Sanguinesti region. They brought the Sanguinesti Affliction, a disease that rapidly infected the village. It is unclear whether the mist occurred naturally, or was orchestrated by the vampyre Lord Lowerniel Vergidiyad Drakan.

The people of Mort'ton gradually fell to the disease. The infected villagers, known as the "Afflicted," lost much of their mental capacity, speaking in gibberish and attacking all non-infected. The disease made the blood of the Afflicted poisonous to the Vampyre overlords of the land, making the town safe from the blood tithe rota. The town's industry and influence ground to a halt when every one of the citizens were struck by the disease.

The affliction also resurrected the dead interred below the town as shades. Many different kinds of shades still reside within the tombs, though the loar shades are the only ones to wander the town above it. The shades plague the now derelict town, attacking anyone who dares to explore the area.

In the 169th year of the Fifth Age, the present day in Gielinor, Mort'ton lies in ruins, and, though the Sanguinesti Affliction is no longer contagious and does not present a threat to visitors, the Afflicted citizens of the town still wander the streets, and the derelict buildings and streets are prowled by Shades, making the place even more hostile. Signs warning of a disease lie at the entrance of the town, which acts as the starting point for the quest Shades of Mort'ton, in which the player attempts to cure the town of its disease.

A Loar shadow floating around

After the quest has been completed, players can attempt the Shades of Mort'ton minigame, in which a group of players can repair the Temple of Flamtaer just north of the town using materials bought from Razmire in the town, and use Olive oil on the Temple's Sacred flame to create Sacred oil, used on pyre logs which can be used to burn the remains of shades in the pyres around the village, giving players access to different keys ranging from bronze, steel, black and silver, in a variety of different colours. These keys can be used in the Shade Catacombs which lie below the town, filled with other varieties of shades and chests containing treasures long forgotten. In addition to providing sacred oil, the Sacred Flame of Flamtaer can also be used to turn Serum 207s, potions which temporarily turn Afflicted back into humans, into Serum 208s, the permanent variety of the serum which completely cures the Affliction. After completion of the Shades of Mort'ton quest, the Serums are used rarely, but they can be applied to ordinary citizens of Mort'ton, turning them briefly back into humans who will, out of gratitude, give the player a small reward. Note that this can be repeated, as even the permanent Serums do not convert Afflicted into regular humans for longer than a few minutes.