From the RuneScape Wiki, the wiki for all things RuneScape
Jump to navigation Jump to search
This article is about the NPC. For the pet, see Mordaut Jr. (pet).
Mordaut Jr.Mordaut Jr. (easy farm requester)? (edit) 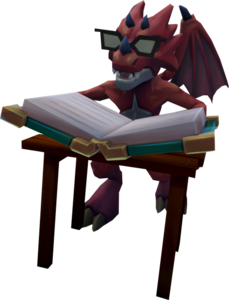 Mordaut Jr. is a minature version of Mr. Mordaut, having also been created by Taraket, and subsequently discovered by archaeologists.[1] He could originally be found by Mr. Mordaut at the Varrock Dig Site, during Breaking the Storm, where he could be interacted with to perform an emote.

Mordaut Jr. can occasionally be found at Manor Farm, asking for help with an easy Farming Guild request.