From the RuneScape Wiki, the wiki for all things RuneScape
Jump to: navigation, search
The Old School RuneScape Wiki also has an article on: osrsw:Monster killing

Monster killing, also known as Player vs. Monster (PvM) or Player vs. Environment (PvE), is the aspect of killing monsters for the purposes of gaining experience, obtaining drops, or as part of a quest or minigame. PvM is contrasted with player killing (PvP) in the sense that monsters are entities controlled by the game itself. 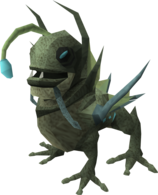 Some minigames, such as Barbarian Assault or Pest Control, provide an objective in which players are organised to hold off or defeat subsidiary monsters. The goal of these minigames is to promote unity and cooperation among players, while still maintaining a fair sense of fun and achievement. There is often great reward to be found while participating in such minigames.

Many players often choose to battle bosses, which occurs in large-scale events, such as the God Wars Dungeon PvM battles, in which multiples of players team up to conquer a single boss, often using the Combat triangle to provide effective killing. 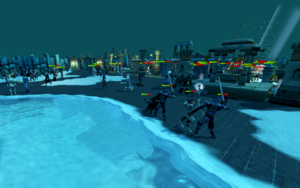 An example of MvM combat.

During Gnomecopter trips (now removed from the game), player spoofs (e.g. Cow1337killr) in member-only areas are actually considered monsters, as they have unique examine options. In RuneScape one may notice that certain monsters, such as revenants, although designed to replace player killers, do not actually fight amongst themselves.

Monster vs. monster combat is sometimes used to an advantage by players because if they deal at least one damage, they will get the drops even though the monster dealt more damage. This is somewhat common in the God Wars Dungeon.