A player transforming into a Karamjan monkey using the monkey greegree.

It is mainly used during the Monkey Madness quest where players need it to pretend they are the envoy of Karamja monkeys. When wielding the greegree, the Spellbook is disabled, but tablets can be used. 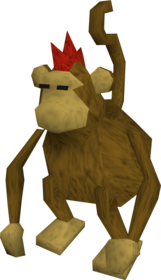