From the RuneScape Wiki, the wiki for all things RuneScape
< Money making guide
Jump to: navigation, search 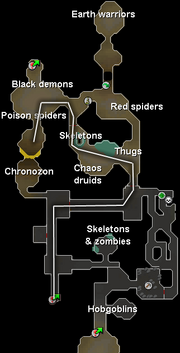 The route to the Earth Obelisk.

Earth orbs are worth 6,452 coins, and are created by casting Charge Earth Orb on unpowered orbs at the Earth Obelisk. With an equipped earth staff, this requires 3 cosmic runes per cast (or 1,179 coins). Using the Edgeville lodestone for banking, you can charge 27 orbs per trip (one inventory slot is needed for the cosmic runes), resulting in a profit of 125,145 coins per trip.

The Earth Obelisk is located on an island in the Wilderness only accessible via the Edgeville dungeon. Using the map on the right as a guide through the dungeon, the round trip to the obelisk, counting banking, takes approximately 205 seconds.

Bear in mind that running through the Edgeville dungeon places you in combat range of aggressive thugs, chaos druids, deadly red spiders, level 84 skeletons, poison spiders and black demons. The Earth Obelisk is also located in the Wilderness, so do not take anything you are not prepared to lose. You cannot use the Earth Obelisk without being attacked by the surrounding poison spiders.

Due to constantly changing prices on the Grand Exchange, some information in this article may or may not be current.
It is strongly recommended to check the live prices on the Grand Exchange before making large investments in any method.
All prices on this page are cached, meaning it is possible that they appear out of date.
To force a new cache of this page, click this link.
If a money making method is out of date, you can edit it or leave a message on the talk page.
Retrieved from ‘https://runescape.wiki/w/Money_making_guide/Charging_earth_orbs?oldid=29794304’
Category:
Hidden category: