From the RuneScape Wiki, the wiki for all things RuneScape
Jump to navigation Jump to search
The Old School RuneScape Wiki also has an article on: osrsw:Molly
For the boss pet, see Molly (pet).
For the cat, see Molly (cat).
Molly? (edit)? (edit) 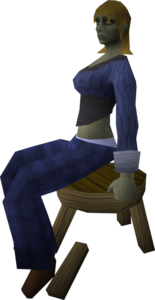 Molly is a woman who lives with Moira in Varrock. The twin sisters live on the top floor of the house just east of the southern city gate, and are involved in the evil twin court case.

Her zombie counterpart also plays a small role in Dimension of Disaster: Shield of Arrav, working for the Phoenix Gang.

Molly and her sister were the two primary characters in the Evil Twin random event.

Molly would appear and teleport the player with her to a tiny room connected to a larger room with a crane control panel. Despite her abilities to teleother any player from almost anywhere, including locations as remote and magically sealed as the Rune Essence mine, she was incapable of teleothering her sister into the cage, possibly due to the complexities of teleportation, as stated by Mr. Mordaut.

Unlike most other non-playable characters, Molly changed her hairstyle, hair colour, clothing, clothes colour and even eye colour with each event. Her gender and skin tone remained the same.

During the event, Molly asked the player to capture her evil twin sister, Moira, among the suspects, who she claimed had been damaging her name by doing evil deeds (although her twin has never been spotted anywhere but in the room containing the crane). Molly would return the player only when they had captured her evil twin sister, who had identical hair and clothing.

If you caught the wrong person two times, Molly would teleport you to somewhere in RuneScape, such as Rimmington.

Logging out did not remove you from the event.

This information has been compiled as part of the update history project. Some updates may not be included - see here for how to help out!
Retrieved from ‘https://runescape.wiki/w/Molly?oldid=35746899’
Categories:
Hidden categories: