From the RuneScape Wiki, the wiki for all things RuneScape
Jump to navigation Jump to search
Moksha deviceCentral platform? (edit) 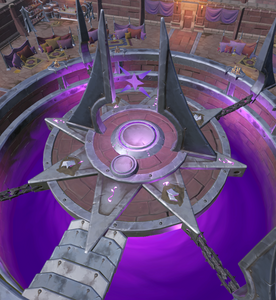 The device is featured heavily in the Orthen Dig Site mystery Fragmented Memories. In that mystery, the player learns of a dragonkin named Skeka who learned how to meditate and use the device to enter the consciousness of a yellow salamander.[1]

The device is restored using a master control, which can be excavated from the hotspots on top of the device. Once the device is added, the device is calibrated three times by modulating the signal of the magical energies controlled by three runic discs. 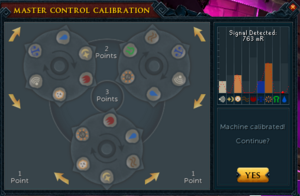 The glory-seeking Professor Alfredo uses the machine, but does not exit the machine despite the danger, and has his consciousness swapped with that of a salamander.[2]

Among the device are some Moksha device excavation hotspots which can be excavated with level 108 Archaeology.

The device can also be studied to uncover the Mind Your Head special research.