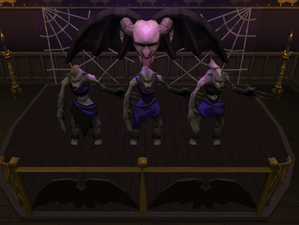 Moira, along with Helga and Greta on the stage.

Moira is a werewolf located in the Grim reaper's house during the 2010 Hallowe'en event. She is one of the werewolf singers for Black Zabeth, along with Helga and Greta and asks the player to make moonshine in the holiday quest "Partying is Such Sweet Sorrow." She is also the one of the only werewolves to be featured in F2P, the others being Shanty Claws, Helga, and Greta.

Moira mentions a relative named Granny Doomeye, who she describes as a very unpleasant woman. Apparently she grew evil trees in her garden, and thus could brew moonshine with evil leaves from their branches. Moira later ate a sandwich filled with Granny Doomeye's meat, indicating that werewolves are cannibals.

This information has been compiled as part of the update history project. Some updates may not be included - see here for how to help out!
Retrieved from ‘https://runescape.wiki/w/Moira_(werewolf)?oldid=35582890’
Categories:
Hidden categories: