From the RuneScape Wiki, the wiki for all things RuneScape
Jump to navigation Jump to search
This article is about the NPC featured in a court case. For the werewolf featured in the 2010 Hallowe'en event, see Moira (werewolf).
Moira? (edit)? (edit) 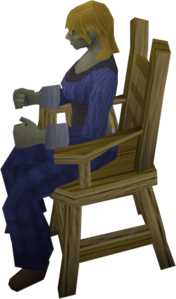 Moira is a criminal involved with evil twin court case. She is the evil twin sister of Molly and is responsible for many crimes. The two live together in a house just east of Varrock's southern gate.

She also features in the Dimension of Disaster version of Shield of Arrav, where she is a member of the Black Arm Gang.