From the RuneScape Wiki, the wiki for all things RuneScape
(Redirected from Mogre (miniquest))
Jump to: navigation, search
The Old School RuneScape Wiki also has an article on: osrsw:Skippy and the Mogres

Mogre is a lore activity that teaches players how to fight mogres.

Travel south-east of Rimmington and north-west of the fishing spots, and look for Skippy along the shore. Speak to him, and he will ramble about being attacked by Mudskippers, but is unable to remember where due to being drunk.

Get a bucket of water (one can easily be obtained by buying a bucket from Rimmington and filling it up at the well), and then right click him and select 'Sober-Up' to chuck the water on him.

He will get annoyed at being soaked in cold wet water, but will be a bit more sober. He will complain about being freezing and requests some nettle tea to warm him up. 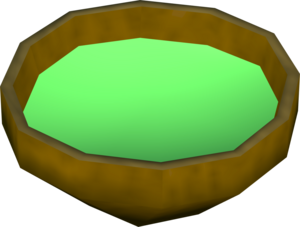 First, get a bowl and fill it with water to create a bowl of water. Equip some gloves and pick some nettles, found near the Canifis lodestone or Draynor Village jail. Add the nettles to the bowl to create nettle-water, then use it on a range to create nettle tea. A nearby range can be found in the house just north of Hetty's house in Rimmington.

Head back to Skippy, and talk to him to hand over the nettle tea. He will thank you, but will now complain of having a hangover. He needs a hangover cure before he will be able to tell you what happened.

To create a hangover cure, obtain a bucket of milk. Next, use some chocolate dust, created by grinding a chocolate bar, with the milk to create chocolatey milk. Finally add some snape grass to finish the cure. All of the ingredients can be obtained near Rimmington; the milk can be obtained by using an empty bucket on a dairy cow at the nearby Crafting Guild, snape grass spawns on the Hobgoblin Peninsula west of the Crafting Guild, and a chocolate bar can be bought from Wydin's Food Store in Port Sarim. 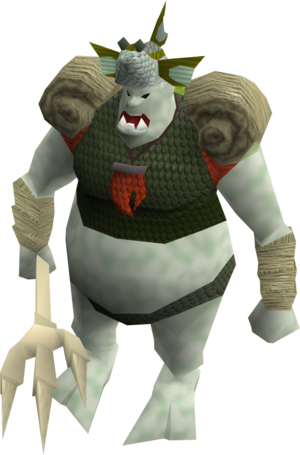 Head back to Skippy, and hand him the hangover cure. His hangover will be cured, and he will start to recall what happened to him. He will reveal that he was attacked by mogres while fishing at Mudskipper Point using fishing explosives purchased from a slayer master, and mistook them for mudskippers due to their hats.

Congratulations, you can now kill mogres!

Mogre (lore activity) is directly required for the following quests/miniquests: