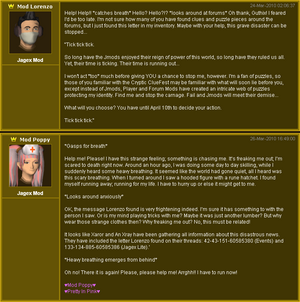 Mod Tale is a thread in the Events section of the RuneScape Forums, that was created by Mod Lorenzo on 24 March 2010. Two days after Mod Lorenzo's post, Mod Poppy also posted something, in which she told she was chased by a hooded figure with a rune hatchet. This thread is related to the Cryptic Moderator Event, which is its unofficial name. The first post was released 60 days after the Strange power event occurred, and 30 days after the release of the Wilderness Castle.

On 24 March 2010, Mod Lorenzo made the following post in the Events Forum.

On 26 March 2010, Mod Poppy replied, where she advertises two forum posts of forum mods, just like the figure who wrote the letter Lorenzo found predicted. Both forum posts include interesting information. They're worth a look! She wrote:

The planned event as seen in the official thread.

On 26 March 2010, Mod Lorenzo edited Mod Howes' 'Featured Events & Live Alerts' sticky thread in the Events forum, after which the following event appeared in the 'Coming Up!' section. The Quick Find Code in it links to Mod Tale.[4]

On 31 March 2010, a new section was added to the thread in the Events forum advertised by Mod Poppy. It included a riddle that was written on a scrap of paper in the wall of Lumbridge Castle. The writer is 'Mis Ter-y'; Mystery or Mr. Y. Soon, a player discovered that the capital letters in it read out:

That means something will happen around 22:00 BST on 10 April. The riddle is as follows:[2]

What once was, wIll no longer be.
When I finish this job, you won’t find Me.

AdvEnturer, You can't stop my evIl plan.
I challenge everyone who thinkS they can.

Are you to Solve my cunning mystEry?
Are you To stop the repeAt of hisTory?

AdvenTurer, it’s just a mattEr of time,
Till you see the results of my New crime.

Be Prepared for this upcoMing event.
Don’t waste time or Be aware that more liveS will end.’

On 7 April 2010, the thread title was changed to Mod Murder Mystery Event and became unlocked. Several forum mods posted, one of them revealed some information:[1]

Those prizes are the opportunity to borrow and use an item the winner chose for 24 hours. The items a winner can choose from are:

Please note that borrowed items CANNOT be worn in the Photo Booth.

An example of a coloured tile, this one being in Gerrant's shop.