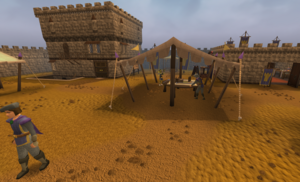 The courtyard of the A.R.M.S. headquarters, several junior cadets at work.

Junior Cadet Mal stood at the entrance of the command centre. Players could speak to him to get an explanation of how the activity works and to participate in tutorials. Also, players could invest in items for reward credits through Mal. 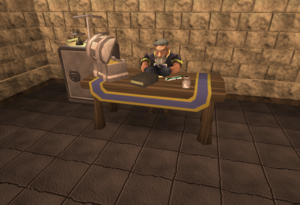 In the north-west corner of the command centre was a bank run by a dwarf. Since Junior Cadet Mal was directly east of it, this made it easy for players to find commodities to trade in. 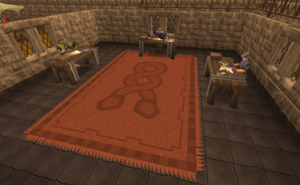 South of the bank was the recruitment building. Here, players could use their investment credits to purchase goblin, dwarf, and/or elf squads. They were essential, since each player needed ten squads to even play Mobilising Armies. 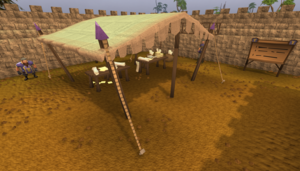 Where to hire special units.

To the east of the bank was the special units tent where players could purchase a maximum of five special units to use in a game of Mobilising Armies. The cost of each unit ranged from 200 investment credits (barriers) to 600 credits (distractions). Special units offered unique advantages during a game; some would damage opponents' squads, while others also affected the player's own squads!

Depending on their rank, players could enter a particular floor of the officer tower to trade in their reward credits for rewards. For example, Junior Cadets could only enter the basement. With a rank of 100, however, players gained access to the first level. 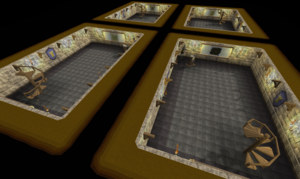 The four briefing rooms for the scenarios

This is where players entered to begin a game of Mobilising Armies. It was basically a waiting room.

This information has been compiled as part of the update history project. Some updates may not be included - see here for how to help out!
Retrieved from ‘https://runescape.wiki/w/Mobilising_Armies_Command_centre?oldid=35661141’
Categories:
Hidden category: