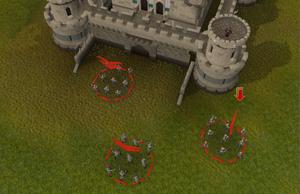 On 1 October 2008, during the October 2008 update, Jagex released more information about this upcoming PvP minigame, as well a screenshot.[2] 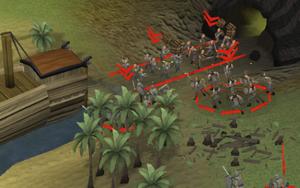 A screenshot of Mobilising Armies, as seen in the November 2008 update

In the December 2008 update on 1 December, Mod Mark noted that the release of the minigame would be delayed until 2009.[4]

On the RuneScape Forums in January 2009, Mod Mark said that Jagex was still developing this minigame to remove any "teething problems", and "focusing on ensuring updates are high quality, which sometimes means you will have to wait longer".

The status of Mobilising Armies was once again updated by Jagex in February's Behind The Scenes. Behind the Scenes, February 2009.[5]

On 21 April 2009, Jagex Moderator Mod Maz wrote on the RuneScape Forums that the minigame developers were "nearly ready to hand over to the QA [Quality Assurance] team".

In the Mobilising Armies blog, released on 26 June 2009, Andrew Gower said that this minigame has been so long in the making because it is "something quite experimental, which is very different to anything we’ve done before", and that it will NOT be "the most epic, mammoth, huge, polished piece of content you’ve ever seen". He also said that it would be released "in the next few weeks."[6]

On 8 July the layout of the official website of RuneScape has changed in to Mobilising Armies because it got released.

The Mobilising Armies update brought on many more updates, including the in-game toolbar and also added notes.

Within the first three hours of release, three of the four game modes went offline (Siege, Hoard, and Rescue) leaving Conflict the only game mode online. This was due to an issue with Siege in which players were unable to join the game, so it was temporarily shut down. They came back online on 10 July 2009.