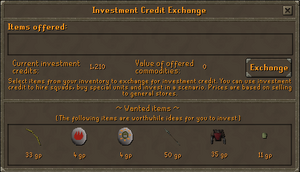 The interface for exchanging credits

Players could exchange many of the products of skilling, such as unstrung bows, summoning scrolls, or Construction flatpacks, with Junior Cadet Mal at the entrance of Mobilising Armies for investment credits. Junior Cadet Mal provided a full list of the many commodities. The maximum number of credits a player could have at one time was 500,000.

Investment credits were intended to clear the economy of items that would usually stagnate due to lack of demand (known often as junk).

The investment credits per item were low alchemy value divided by two, plus one.

On the removal of Mobilising Armies on 3 December 2018, any remaining investments were converted for coins; every five investment produced one coin with the following login message:
You have received a payment of [amount] coins for your service to A.R.M.S.

This information has been compiled as part of the update history project. Some updates may not be included - see here for how to help out!
Retrieved from ‘https://runescape.wiki/w/Mobilising_Armies/Investments?oldid=35685073’
Categories:
Hidden category: