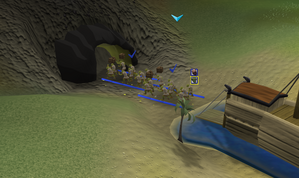 A game of the hoard scenario.

Hoard is one of the scenarios of Mobilising Armies. As defined by Jagex "This scenario is set at a dragon’s volcano, where you must collect 100,000 gold or defeat your opponents to become the victor. Gold can be collected by using the ‘Cave Collect’ command in your Squad Commands tab or by just left-clicking the cave. In order to collect gold from the dragon, you need at least two squads, one collecting at the cave and another to carry the gold from the cave to the boat. You can also steal gold by killing opponents' squads, and it is worth noting that squads collecting gold are more susceptible to damage." Players must complete at least 1 round of Siege in order to be able and play Hoard (It does not matter if the player loses the round).

The story is described as

Currently, the best strategy is to focus solely on collecting. Rarely does attacking others result in a win. Hoard on average takes 8–11 minutes per round, and up to 15 minutes if multiple teams attack instead of collect. Players who attack others rather than collecting are often frowned upon. Hoard is the quickest way to increase rank (if you win the round, if not then suiciding at Siege is faster) and if done properly requires no resupplying of units if you stick to defending a single collection point.

Recommended Units: A mix of heavy units is best since defending is key, with 10 dwarf squads having more life points. If you plan on expanding and trying to collect from distant points, light troops can help get there and retreat under fire.

Recommended Special Units: Combat is not the big focus, therefore defensive specials like barricades and distractions are most effective. If you are often having your collection point invaded, use gliders to kill off one of the attackers to disable them from collecting from you. 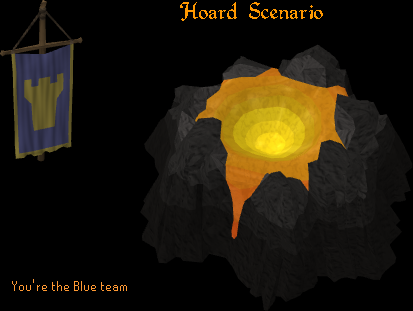