From the RuneScape Wiki, the wiki for all things RuneScape
Jump to navigation Jump to search
For the achievement, see Missing My Mummy (achievement).

Missing My Mummy is a quest in the Mysteries of the Mahjarrat series although it is mainly a desert quest. It does, however, provide insight into the history of the Mahjarrat tribe. The quest revolves around the restoration of Queen Senliten, a pharaoh from the Second Age.

The desert sands rarely offer up their treasures, but when they do it is sure to be of interest to those with pure intentions and those with gold in their eyes. Leela, Osman's agent in Draynor, has heard that a new pyramid has been unearthed, and that secrets from the days before the God Wars may well be due some time in the open air...

If Leela does not show up in Draynor Village, you need to complete the Stolen Hearts and Diamond in the Rough quests first, even if Icthlarin's Little Helper is already completed.

Items needed: Combat equipment, free inventory spaces
Items recommended: 500 or 1,000 coins (depending on whether you have an activated ring of Charos) if using the magic carpet transportation, and filled waterskins

To start the quest, talk to Leela in Draynor Village, who can be found standing against the north fence north of the jail. She tells you about a mastaba, an ancient kind of pyramid, that is situated near Uzer. According to her, this tomb is inhabited by a pharaoh queen and Leela wants you to go and gather more information on the queen.

To reach the Uzer Mastaba, you can take one of many routes: 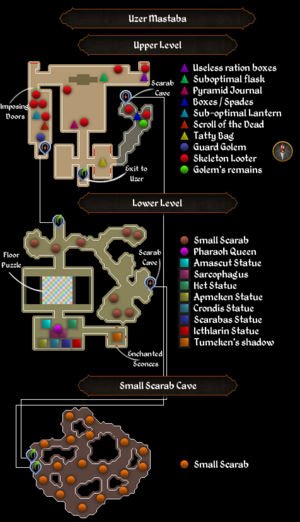 Once inside, explore all the rooms and rummage through all the skeletons (don't kill the golem guarding the stairs). They will rise up and turn into level 42 Skeleton looters, becoming aggressive. Killing each one will provide different items, including desert shirts, empty waterskins, tools or runes which you may pick up.

The item that Leela requires is the scroll of the dead, which details the mummification process that was used on the queen. Other items needed from the skeleton looters are a canopic jar, a pyramid journal and a mummy hand. These items are not needed immediately, but it is suggested to keep them for later on in the quest.

The three clustered skeletons in the west room just after the stone door will all spring awake after rummaging one and attack you all at once, so be prepared for an outnumbered fight. Use area-of-effect abilities like Cleave to kill the skeletons more quickly. Also, before entering the alcove in the far north-east, disable a wall trap by searching the odd markings, or you will take damage from the spikes it conceals. You may fail disabling it, however. Gather all four items to save inventory space in the next section.

Talking to the Golem's remains in the eastern cavern reveals that there is a curse upon the mastaba, under which all creatures who loot the tomb will be bound to it, to protect it from future looters. He also mentions that the queen, her family and their direct employees and also those without flesh are immune to the effects of this curse.

None of the items found on the ground (useless ration boxes, tatty bag, defective spades, shattered axes, sub-optimal lantern, and suboptimal flask) are needed to complete the quest, but it's helpful if you investigate them so you can confront Ali Morrisane later.

Return to Draynor Village and talk to Leela again, who mentions that the mummy was split up as part of burial rituals, and also that the tomb was frequently raided. Therefore, you must now reconstruct the queen to at least 75% of her original self.

After having spoken to Leela about all the four items that you obtained from the looters, you will now be able to make both spiced wine and a pot of wheat, required for the revival of the queen. To make the wine, use the spice on your jug of wine, and to make the pot of wheat, simply use the wheat on an empty pot.

The following two subsections only need to be completed if the player wishes to restore the queen to 100% completion. The quest only requires 75% to complete, but there are further experience rewards for full completion. In addition, The Curse of Arrav requires full completion. 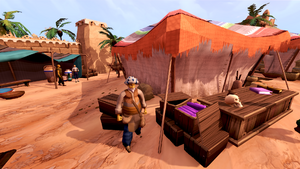 Travel to Al Kharid and talk to Ali Morrisane in the marketplace north of the lodestone, near the silk trader. Ask him about the various defective items that you found in the mastaba, and he will explain that he sent the bandit looters to get treasure from the pyramid, but they returned with just documents, which no one can persuade him to give away.

Give him any sq'irkjuice obtained from the Sorceress's Garden minigame. If it's your first time getting the juice, talk to Osman in the palace about the juice, and then simply encourage the apprentice to vent to you about working for the sorceress and she'll teleport you to the garden. Exchange the juice with Ali for a copied name papyrus. Then wear your ring of charos (a) and talk to Ali Morrisane again to persuade him to give you the original document – the mummy's name papyrus. You find out that the queen's true name is Senliten.

Talk to him again about the tomb. The documents that he had obtained from his looters have been sold off to various buyers, most prominently Reldo, the Varrock palace librarian. Before going to Varrock, if you don't already have one, pick up a flier from Waseem the Leaflet Dropper, north of the Al Kharid mining site.

Reldo tells you that he did buy some scrolls off Ali, but they are incomplete. He promises to hand over the originals once he has copied the complete form. He also says that Ali is cleaning the papyrus and re-using them as fliers. Give him an Al Kharid flyer, to which he notices that Ali has been using a cheap cleaning agent, and that the text can still be imposed for copying. After he is done, you will receive a scroll of praise.

Make sure you have full prayer points and head back to the mastaba. Inside the Uzer Mastaba, head north-west, open the imposing door, and talk to the Golem Guard at the stairs. He will keep saying 'Halt!' and prevent you entry into the Pharaoh Queen's tomb, so you will have to kill him. You will not have to kill him a second time to access the lower level again.

Descend to the lower level (Note: You may be placed in the mummy's tomb after descending the stairs, past the puzzle. If so, you will need to cross the puzzle backwards to complete the rest of this section). There are level 42 small scarabs wandering around that are aggressive regardless of your combat level, although quite inaccurate. Do not head directly south yet, but go down each passage to the west and east and collect the three canopic jars and the mummy with no hand. Using the mummy hand on the mummy magically grafts it together, thus re-forming Senliten's mummy.

In the south-easternmost passage, climb through the uninviting hole to access a large room filled with another large group of small scarabs. On the same wall where you come in at to the south, there is another uninviting hole. Climbing through it unblocks a shortcut to/from the upper level of the tomb near the entrance and completes the achievement Uzer Master, required for the master quest cape. This room contains nothing else of interest. Climb back through the "cave in" and then through the northern hole to return to the lower level. 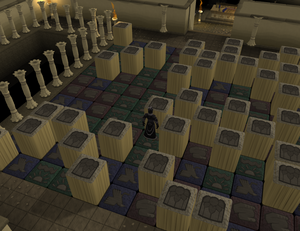 After you have obtained the jars and the mummy, enter the central chamber of the lowest level. You will find yourself before a floor puzzle. The puzzle is different for every player and changes with every visit.

The easiest way to get through this puzzle is to find a path of blue and green blocks or of red and yellow blocks all the way through, as this will result in no damage, or you can tank your way through it if you bring enough food. It is not necessary to take a straight path, as you can make turns through the puzzle.

Check progress via the pyramid Journal or the scroll of the dead. You need to revive various aspects of Senliten — her body, spirit, shadow, ushabti (body double), name and personality. The interface shows the percentage of completed actions and remaining actions. The quest completion requires 75% complete, though continuing beyond that rewards more experience. 100% is required for The Curse of Arrav quest, so make sure that you complete Senliten.

A player restoring the statue of Apmeken

Senliten's body must be replaced to their positions, including the canopic jars and her mummified body.

Senliten tells you that restoring each statue ensures that she is linked to all the other deities of the land.

Praying at Amascut's altar will boost your prayer by up to 40 points over your maximum, at the cost of 3 life points per prayer point; the other altars restore prayer normally. This is also one of the tasks in the Desert Tasks. Note that you cannot recharge prayer points from the statues until all of them are remade. 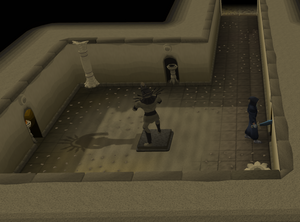 You now need to light four 'Enchanted sconces' using 5 fire runes as fuel for each. 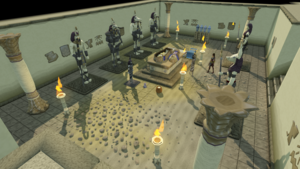 The look of the Tomb, after completing the tasks

After reconstructing the queen's body, spirit and shadow, she can now be found standing at the base of her sarcophagus. You need to create her body double using her image.

Creating a body double for the queen provides a replacement for her in the afterlife. The food and drinks are symbolised by the wheat in clay pots and the traditional drink – spiced wine. 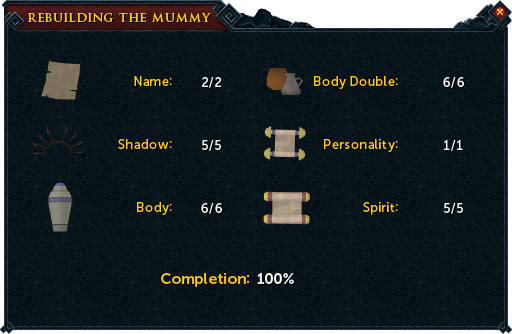 You should now have 100% completion. Go back and speak to Leela. 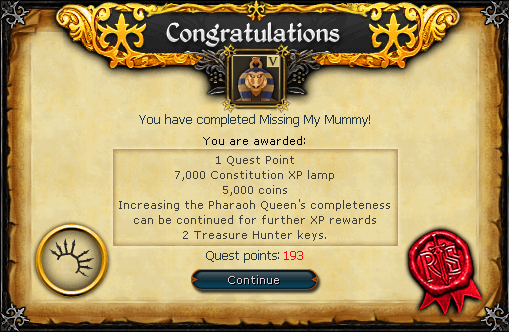 Experience earned while completing the mummy:

Missing My Mummy is directly required for the following quests/miniquests: