From the RuneScape Wiki, the wiki for all things RuneScape
(Redirected from Miscellania & Etceteria Dungeon)
Jump to: navigation, search
The dungeon entrances 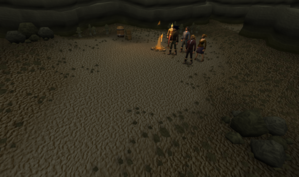 The Fremennik youths' camp in the cave.

This information has been compiled as part of the update history project. Some updates may not be included - see here for how to help out!
Retrieved from ‘https://runescape.wiki/w/Miscellania_and_Etceteria_dungeon?oldid=35267723’
Categories:
Hidden categories: