From the RuneScape Wiki, the wiki for all things RuneScape
Jump to: navigation, search
"Mirrorback" redirects here. For the special attack, see Noxious weaponry.
For the pet, see Gavin. 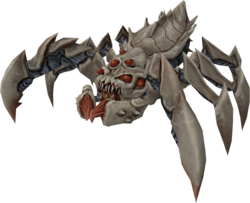 A mirrorback spider will also appear as part of the noxious weaponry's special attack. It possesses 10,000 health, but works considerably differently than the ones in the Araxxor/Araxxi encounter. The spider will only absorb and reflect 50% of the damage dealt to the host (making it similar to Debilitate, as the remaining damage is taken by them) and only lasts for ten seconds, dying off upon losing all of its health or the allotted time passes.

Killing Araxxor with reflected damage from a mirrorback spider he summons is a requirement to unlock Gavin.

Once an araxyte pet has been obtained, a mirrorback spider will spawn from an egg at the end of the top path. This spider does not count towards the 20 spiders Araxxor summons and will continually appear until Araxxor is "killed" from the reflected damage by the spider.

Mirrorback spiders do not count as a spider for Slayer assignments.

A mirrorback spider being summoned by the player.