From the RuneScape Wiki, the wiki for all things RuneScape
Jump to: navigation, search
This article is about the NPC that was part of the 2009, 2010, and 2011 Hallowe'en events. For other uses, see Spider (disambiguation).
For other uses of Infinity, see Infinity (disambiguation).
SpiderMinstrel WebInfinitySpiral Orb? (edit)? (edit) 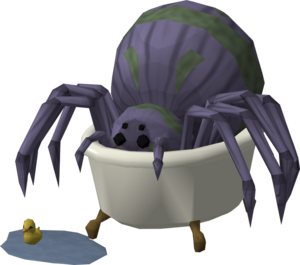 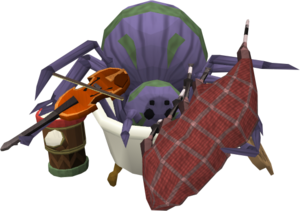 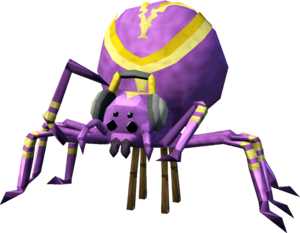 Minstrel Web, also known by her stage names of Infinity and Spiral Orb, is a large spider musician that appeared in 3 consecutive Hallowe'en events: 2009, 2010, and 2011, as well as the Gower Quest.

For the 2009 Hallowe'en event, players had to go to the Grim reaper's house and try get this spider out of his bathtub, as if the Grim Reaper touches her, she will die. The Grim Reaper does not want to do this, since "its time has not come" (the spider is far from its death). This isn't as easy as it sounds as players have to go to the Spider Realm to ask the Spider queen to make the spider leave. The spider isn't very talkative which certainly doesn't help when trying to get her out of the bathtub.

In the 2010 event, players had to help her by finding coloured spiders in the Grim Reaper's house then putting them on tiles of corresponding colour to create music for the band Adamantite Damsel. Between the two events, Allan, a raven, flew into the web of Minstrel Web, where she asked it to either help her or get eaten.

In the 2011 event, Minstrel Web informed players that her new stage name was Infinity after having split from Adamantite Damsel. She operated the DJ booth for the dancefloor at the Grim Reaper's Citadel and asked players to help her form a Hallowe'en-themed nonogram.

During the Gower Quest Minstrel Web appears as Spiral Orb, the DJ at the Behind the Scenes bar. During the quest, she informs players on where the missing Life altar fragments are located. After the quest she gets inspiration from the player's actions and composes a song called 'Broken Rocks, Broken Heart'.