Minnie Coop could be found in Varrock Square by her Corgi stall during the Diamond Jubilee event. Upon speaking with her she would send players to find her 6 missing corgis that have run away. When a corgi was in sight, players could click "Return" to send them back to Varrock. 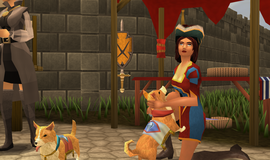 Minnie Coop and some Corgis.

For finding all six corgis, players would be rewarded with the ability to keep a Corgi as a pet.

See Corgi for a list of all corgi locations.