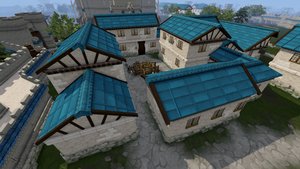 The Mining Guild is a free-to-play guild which requires level 60 Mining to enter. It is composed of two parts, a building complex located in south-east Falador across from the Artisans' Workshop, and an underground mine located in the southern end of the Dwarven mines. The mine can be accessed through a small gate in the dwarven mines or by climbing down a set of ladders in the centre of the building complex. These entrances are guarded by dwarves who answer questions about the guild and prevent players without the necessary Mining level from entering.

Using Temporary boosts, the guild can be entered without 60 mining:

The Mining Guild is popular amongst miners due to its proximity to the Artisans' Workshop where players can deposit ores into their metal bank. There is also a deposit box in the resource dungeon just outside of the guild. Some players use the Mining Guild as a means of reaching southern Falador without travelling above-ground from Ice Mountain to the north.

There is also a resource dungeon by the bottom of the ladders that lead into the guild. It requires a Dungeoneering level of at least 45 to enter, and gives 4400 Dungeoneering experience for the first entrance. It contains 5 luminite rocks and 4 drakolith rocks.

One of the dwarves, Gadrin, found guarding the city entrance to the guild is none other than the Master of Mining and is able to sell the Mining cape to members who have achieved a Mining level of 99 for a fee of 99,000 coins.

In the Year 8 of the Fifth Age, the tribal leader Raddallin united a variety of local settlers under the banner of what would soon become the nation of Asgarnia. Using the power of the newly discovered arts of runecrafting and magic, coupled with the military aid of the Kinshra and White Knights, Asgarnia flourished, driving out many of its hostile races and solidifying the settlement of Falador.

While many of the area's races, such as the goblins and giants, were hostile and refused to make peace with the human settlers, some of the older peoples to inhabit the area were more accepting. Amongst these were the dwarves, who had lived in a large colony beneath Ice Mountain for perhaps hundreds of years. The dwarves, including the Imcando who lived mainly in halls such as Camdozaal, were cautious, agreeing to an uneasy treaty that alleviated any military conflict that the Dwarven Realm might have with Asgarnia. Although this did prevent battle, the peace between the dwarves and humans was somewhat uneasy; during the Fourth Age, many dwarves had fought to keep humans on the surface.

As Falador flourished over the years, its political ability did as well. The military might of the White Knights, Kinshra, Temple Knights, and Asgarnian Royal Family made it a force to be reckoned with, despite its internal turmoil. The dwarves, not wanting to initiate a war, agreed to keep their mines limited to the largely untamed pine forests of the north. This was a subject of controversy amongst many of the colony's high council, who felt they had rights to the extremely rich ore seams which lined the caverns beneath Falador.

In the winter of the Year 164 of the Fifth Age, the Kinshra Lord Sulla declared war upon Asgarnia and the Dwarven Realm. Amassing a considerable army of Kinshra knights, chaos dwarves, mercenaries from the Wilderness, and native goblin tribes (with the exceptions of the Thorobshuun and Garagorshuun), Sulla orchestrated what would come to be known as the War of 164.

The dwarven council was divided over whether to offer support for Asgarnia, which continued to have an uneasy peace with the dwarves. Some argued that Sulla would not attack their people if they remained neutral, while others cited his Zamorakian extremist tendencies and alliance with their enemies, the chaos dwarves, as sufficient reason to join Asgarnia. Doric, a dwarven blacksmith from Keldagrim that had shown support for Asgarnia during the War, led a diplomatic committee before the council, hoping to gain their support.

The adventuress Kara-Meir, alongside several other prominent individuals, eventually convinced the dwarves of the mountain to aid them in ending the Siege of Falador, which had entered its peak during the course of the diplomatic debates. Under Commander Blanheim, a commander of the Dwarven Black Guard, some 900 dwarven soldiers travelled south to fight the Kinshra in the siege. Along the way, they joined Lord Radebaugh and his force of 600 Burthorpe Imperial Guard.

Together, the collective forces of the region were able to crush the Kinshra assault and narrowly save Falador. The dwarves' willingness to aid Asgarnia would play a key role in securing a far more friendly relationship between the region's dwarven population and both Misthalin and Asgarnia.

The creation of the Guild[edit | edit source]

In early 165, the dwarves were given permission to extend their mines to the veins beneath Falador, which had previously been restricted under a decades-old land agreement. The Dwarven Mines would expand greatly under this agreement, making it one of the largest in the world.

The Mining Guild was the most significant of these expansions. The massive quantities of Orichalcite, Runite and Coal in the area would make it ideal for the dwarves' mining purposes. The ore would be used to supply both their colony beneath the mountain and, although it was still unknown to most of the human population, their capital city of Keldagrim. In a gesture of good will, qualifying humans are to this day granted permission to what could legally be made a dwarf-only guild.