Miners are rescued after the Cloaked figure blows himself up and causes a cave-in during the quest King of the Dwarves. Each of the six miners will appear in the player's inventory after being rescued from the rubble. They should be taken to Foreman Jaak, who will look after them.

Players can only carry one miner at a time, and leaving the area will cause it to be removed from their inventory and will reset the rubble puzzle with the miner in their previous location. Attempting to carry more than one miner prompts the message "Dwarves are heavy; you can only carry one at a time." 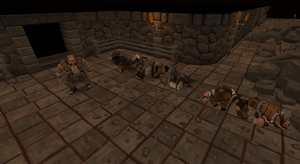 Four miners are rescued, but two die from their wounds
Retrieved from ‘https://runescape.wiki/w/Miner_(item)?oldid=16274176’
Categories: