From the RuneScape Wiki, the wiki for all things RuneScape
Jump to: navigation, search
The Old School RuneScape Wiki also has an article on: osrsw:Mindslayers 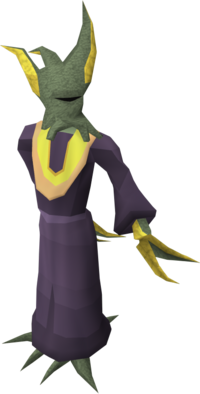 The Mindslayers are a race of intelligent, tree-like humanoids, located in the realm of Zanaris. Very few members of this race appear in-game. Whilst the Mindslayers are not referenced by this name by any NPC, this name was revealed by Mod Biscuits on the Official RuneScape Forums.

The only Mindslayers to appear in-game have taken on the job of the Gatekeepers of Zanaris, guarding the entrances to the Zanaris Market and the Shady grove, the lair of Tanglefoot and Baby tanglefootii. In-game, they are merely referred to as Gatekeepers.

There are currently only five Mindslayers which appear in-game:

Not much is known about the Mindslayers, and their role in the history, and day-to-day workings, of Zanaris, although their primary role seems to be that of Gatekeepers. The Mindslayers have a tree-like appearance, and are probably quite in tune with nature, much like the nearby fairies. They seem to have quite large families, and are capable of breeding with Humans, evidenced when one of the four market guards claims the Old Man who used to guard the market gates was his father.