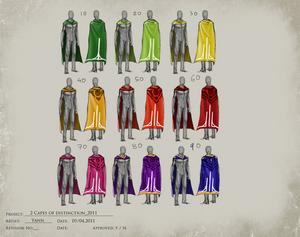 Milestone capes are a series of nine Capes of Distinction that are "earned" each time all of a member's skill levels (excluding elite skills like Invention) reach a multiple of 10. They were released on 3 May 2011, and first mentioned in the developers' blog "Capes of Distinction". Players who have levelled every skill above level 10, 20, 30, and so on, will be able to weave a special cape on a loom. Unlike other Capes of Distinction, this cape does not come with the accompanying hood, nor an emote. Each milestone cape comes with a defence bonus of 4. All nine of the milestone capes can be stored on the cape rack of a player-owned house.

The milestone capes appear to stick out more from the neck compared to other capes.

This information has been compiled as part of the update history project. Some updates may not be included - see here for how to help out!
Retrieved from ‘https://runescape.wiki/w/Milestone_capes?oldid=35338331’
Category:
Hidden categories: