The Message Centre is Jagex's system of contacting players by having a Jagex moderator send a message to the player's inbox. For example, if a player becomes a member, the player is sent a message telling them about their subscription, and then receives another when their subscription expires. Players also receive messages if an offence has been added to their account, whether it be an in-game offence or an Official Forums offence. Players do not receive details of the incident if it was in-game in their Message Centre. They must go to the "Appeal offence/ban" part of the website to see the details and appeal the offence/ban. However, Official Forums offences are displayed in the Message Centre, with details of the incident. Official Forum offences cannot be appealed. All messages sent to players by Jagex are strictly confidential. Players will also receive notifications regarding billing notices. Players may receive an invitation from Jagex to become a Player Moderator, Forum Moderator, or Community Helper; this is the only method Jagex use to invite players to become volunteer moderators. 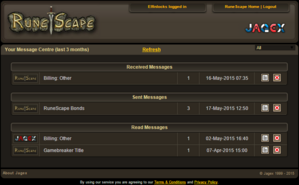 Message Centre as seen through FunOrb.

Players used to be able to contact Jagex via the message centre. Many players would ask Jagex questions regarding future updates or bugs that they saw in-game. It would usually take Jagex one day to reply, but due to the fluctuating amount of messages going in and out, the response time could vary from a couple minutes to several days. This ability to send messages to Jagex has since been removed and Jagex only contacts players when necessary.

Jagex has strictly said that they will only contact the player through RuneScape's Message Centre. Players must be aware that if someone contacts them through e-mail or any other means besides the message centre, then it is most likely not Jagex and they may lose their account.