From the RuneScape Wiki, the wiki for all things RuneScape
Jump to: navigation, search
This article is about the mage who used to be north of Falador. For the mage fought during While Guthix Sleeps, see Mercenary mage.

The Mercenary mage was a mercenary fighting trolls north of Falador. He could be seen with the Mercenary warrior and the Mercenary ranger. He was equipped with full Infinity robes, a Chaotic staff, and the Runic accuracy aura. He could be seen doing the Levitate emote, along with the other two mercenaries. His combat level was 113. Also when inspected it stated the mage should be wearing Infinity gloves, however he quite clearly wasn't. If you inspected his Chaotic staff, the Mercenary leader would give you some background facts about it. He told you that it is the strongest staff he had seen and that the Mercenary mage had acquired it through his journeys throughout Daemonheim. 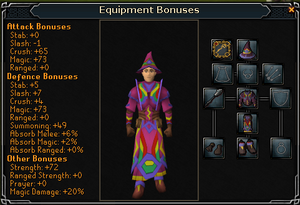