For the historical version, see Joe.

Mercenary Joe is one of Khnum's men as a mercenary of the Skulls gang. After they were recruited by the mysterious Lady Keli to help with the kidnapping of Prince Ali Mirza in Draynor Village, he, along with two other men was amongst a small party, other guards being Apep and Heru, to escort the Lady and her prisoner to the boat heading for the Kharidian Desert. When Ozan, Leela and an adventurer interfered, Keli threatened to execute the prince and, after getting on the boat, ordered Joe to kill the trio. He refused, on the ground that he didn't get payment for it in his contract, to which she reacted angrily and cast a spell on the mercenaries, making their eyes glow cyan and turning them into her zombies. He was defeated henceforth. 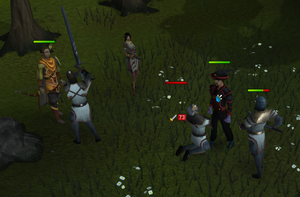 Joe is defeated by the party.