Mental Health Awareness Week was a time-limited charity event. In this event, the player gathered charity tokens for Kat, Zoed, and Lau'Ra, found north of the Lumbridge Crater.

Players will be able to check in with in-game charity representatives outside of Lumbridge Crater at any time during the period. Each day they'll get the chance to answer some questions about mental health, and will be rewarded with lamps.

Handing in charity tokens will unlock a variety of rewards. Certain skills or actions yield varying amounts of extra tokens. Both the rewards and bonus actions change yearly.

Each time the player logged in during the event, they were greeted with one of the following announcements:

Event noticeboards and the Event interface could be used to teleport to the north of the crater for the duration of the event.

In 2019 the YMCA was changed to You Are RAD, and Scoop and Percy were added into the charity shop.

In 2020 the Defender of the Mind wings and brain plushie were added into the charity shop. 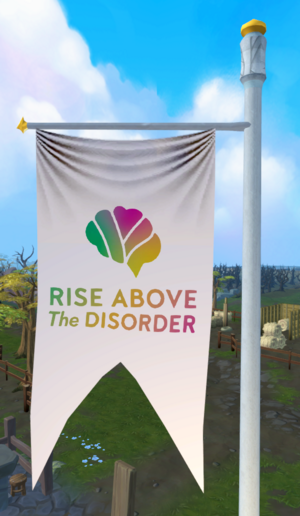 2020's Rise Above The Disorder Banner

Answering questions for the three representatives, Kal, Lau'Ra, and Zoed, north of Lumbridge Crater gives a small XP lamp for each correct answer, with one question from each per day. Questions can only be answered on the day they appear. The questions and their answers are listed below.

This information has been compiled as part of the update history project. Some updates may not be included - see here for how to help out!
Retrieved from ‘https://runescape.wiki/w/Mental_Health_Awareness_Week?oldid=35691789’
Categories:
Hidden category: