The Worker district, often called the slums, is the smallest district of Menaphos, primarily harbouring the city's slaves and labourers. These can be found mining, begging and lamenting their fate around the district, overlooked by the Menaphite Guard. There are also facilities for pottery and a smelting furnace in the area. The slums' associated faction is the Worker faction whose leader Batal is located next to the district's bonfire.

Currently, the slaves are in open revolt as their Sophanite counterparts were temporarily relieved of their duties whilst the city was quarantined. Captain Coenus has succeeded in halting the rebellion in the upper quarters of the city, but the Ports and Worker districts are still protesting. 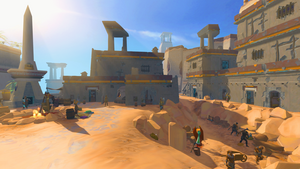 The Worker district of Menaphos

A map of the Worker district