From the RuneScape Wiki, the wiki for all things RuneScape
(Redirected from Membership loyalty points)
Jump to navigation Jump to search

Auras are equipped in the Aura slot and are activated by clicking Activate aura. All of them have an activation time, which shows how long they last, and a cooldown time, which shows how long it takes to be used again. This is clock time and still counts down even when logged out. If an activated aura is unequipped, it cannot be used again until it is recharged. If an aura is lost, it can be reclaimed by Xuan, Dilwyn, or Wafa fully charged if it wasn't on cooldown. If an aura is lost while it is activated, it will go on cooldown when it is reclaimed. 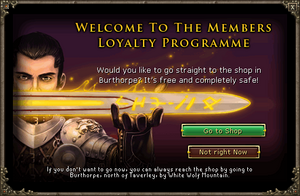