From the RuneScape Wiki, the wiki for all things RuneScape
< Meiyerditch(Redirected from Meiyerditch shortcut guide)
Jump to navigation Jump to search

Travel within the sprawling ghetto city of Meiyerditch in the Sanguinesti region is never a simple trek. The city is in ruins and is very difficult to navigate. 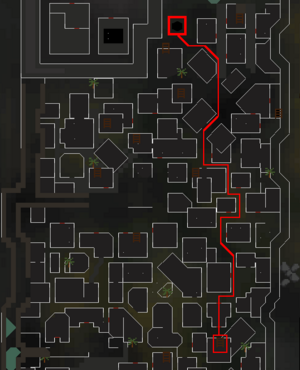 Map of route - mines to hideout

The quickest method of travel is by taking advantage of the Vyrewatch. When stopped and asked for a blood tithe, one of the choices players are offered is being sent to the mines. Once there, the player simply needs to mine 15 Daeyalt ores to be released in the northern section of the city. The pickaxe in your toolbelt will work. When you have the required 15 ore, use the ore on the cart to fill it, then speak to one of the Juvinate guards to be released. Follow the map to the right which places you 7 steps from the end of the Sickle Logo Course. From here climb the ladder, then proceed to jump to the floorboards to the east. Climb down the stairs. Go south east and push the wall to enter a new room. Proceed to push the "decorated wall" which has a sickle symbol. This should turn a portion of the rug into "lumpy rug". Open this to enter the hideout.

A marking showing the course

To get to the hideout from the video, follow it until the last set of 3 doors (past the fireplace house) and go up the ladder to the south instead of going north. 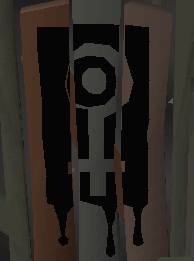