Meeting rooms are specialised areas of the Clan Citadel meant to accompany meetings between multiple players in person. There are four meeting rooms inside a citadel, a large tent in the welcome area, two small meeting rooms next to the party room, and a senate on the ground floor of the keep.

Clan Tent in the Welcoming Area.

There is a large tent in the welcoming area of the citadel. 10 visitors can enter the small meeting rooms and tents. Meetings can be set to public or private; public meetings allow any clanmate to enter and talk, while private areas restrict access. The first member to set up the private meeting will be able to decide which ranks enter, although they may not restrict access to those with higher ranks than themselves. There is also a ballot box where clan members may vote. If all clan members leave, the meeting will end. 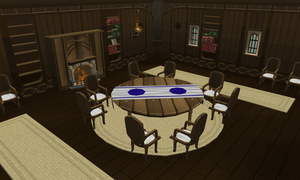 One of the clan meeting rooms.

On the first floor of the keep are the meeting rooms. These can be unlocked at tier 2 citadel. The meeting rooms have a certain rank that can start a meeting, which can be changed by the leader in the permissions. The player who started the meeting may invite others to it, using the master invitation which expires after 15 minutes. To invite them, use the master invitation on them, and they will receive a meeting invitation, used to access the meeting. While any number of players may be invited to the meeting, only ten may be inside at any given time. These players do not have to be members of the clan, but they must have RuneScape membership. 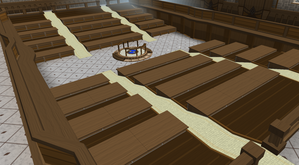 The Clan Senate showing the benches and podium.

The senate is a place for big public meetings, with rows of benches and a podium for a speaker. Players may come and go as they wish. Players are allowed to sit in on the benches. In the middle of the Senate is a podium which can face different directions.

This information has been compiled as part of the update history project. Some updates may not be included - see here for how to help out!
Retrieved from ‘https://runescape.wiki/w/Meeting_rooms?oldid=35686426’
Category:
Hidden category: