The following text is transcluded from Transcript:Me! Oh, and a few others..
This official Postbag from the Hedge was copied verbatim from the RuneScape website, but has since been removed. It is copyrighted by Jagex.
It was added on 24 April 2006.

A complex clutter of letters this month, kicking of with my favorite subject… me!! If you’re lucky you might even see me in the game visiting a few of my favorite spots. Feel free to say hello and please, don’t be scared!! I’ll explain how it happened one day. I’ve also been talking to river trolls, beards, and we even ask Boot to explain the legend of the black hole. Then to finish it off we managed to ask the mime to err, mime a few responses for us. Have fun!

I admire you. You must be sooooo brave to do your job and stick to it. In fact there is a HUGE crowd of us in our Postie Pete fan club and we would all liketo meet you. But no matter where we look we cant find you. :-( Do you ever go anywhere where we can find you? Or do you go on some "staff only" world? From the president of the Postie Pete fan club/Your No 1 fan,

Well, imagine my joy when I read this one! I’m glad my work is appreciated, it certainly can be a challenge when asked to chat to Rantz (shudder) or the bandits up in the wilderness. Generally I am pretty safe during my travels thanks to wizards guild and their clay teleportation tablets. Not being much of a mage I always had problems getting about, especially when new lands are discovered nearly every week, but these tablets sorted it right out! If you look carefully you might see me popping about, I often hang around with my friend Reldo, visiting any of my brothers or chatting to the Oracle up in the mountains. Hope to see you there!

I was just wondering if your done fixing your boat so we can visit Ak-Haru's Homeland. (Ithink that is were you go) Because that sounds like a fun place to visit. Maybe you could even gimmie a discription as well. Im sure many would like the info as well.

(Puts on amulet of ghostspeak)

…and they won’t relinquish the power they now have. Several of the locals have been taken into slavery, which is why we have been so reluctant to return. The land itself is a place of wonder and mystery, lush with flowers which could not grow in hostile places such as this. It’s such a pity there is so much bloodshed there now, I… I… (at that point, the ghost broke down into ghostly tears. I felt it best to leave).

Karmic burden? What are you talking about? If I can avoid prison by going round and handing out a couple of spinach rolls (lots of people think they are really rare for some silly reason), then I will. Karmic burden indeed! What’s wrong with spinach anyway? You won’t eat that, but you will eat roasted swamp snails and that gnome rubbish! Very, very odd I tell you.

Recentely I stumbled across a shiny blue doughnut resembling disk that had no apparent use. After using it with various things such as anvils and the Chaos Elemental, I decided to examine it. To my surpise, it said "Used to get out of Thordur's black hole."

So I did a bit of research and found Thordur's location is remarkably close to yours. When I ask you, all you do is tell me your long, painful to listen to life story. So, if you don't mind me asking here, WHAT DID YOU DO TO THORDUR AND HIS MYSTICAL HOLE OF BLACKNESS!?

Thordur used to have a theme ride really close to my little shoe, er, sorry, cave. I used to live in a shoe you see, it's easy to get confused… but anyway, he was forced to close it down. You see, it was a magical journey to some really dark, really empty shoes. I mean caves. People wanted to see the “black hole”, a place where all the naughty dwarves were sent when they had been bad. My mother used to tell me that I would be sent there if I didn’t clean my shoe in the morning. I used to live in a shoe you see. That’s why I am called Boot. Anyway, Thordur ran into problems with the board for Dwarven tourism who had issues with some humans who didn’t like shoes. No, hang on, that’s not it… no, wait a mo… They had become stuck out in the blackness. The black guard had tried to shoe them, err, I mean shoo them out, but they, like all humans, wouldn’t stop complaining. So he had to close the place down. Anyway, the secure cells they send bad folks too are far more organized now, so the tale of Thordur's black hole is more of a legend these days. Now, where’s my old woman gone?

For the mystikal lable above your head does indeed state RIVER Troll does it not? May i ask why then ,if you are a River Troll not an imposter, what you are doing in the salt waters of the Kandarin Sea? Is it because you are a male Troll and wouldn't ask for directions or is it because you are a female Troll and couldn't read the map. Mabe I am wrong with both of these and it is due to some other Troll specific reason?

Finally this month, we have a short interview with the Mime artist. Several letters have been sent in posing various questions, the best of which I asked him about. Heres what he had to say mime:

hello mime. have u ever thought of another profession… say, a doctor or...um.. rally car driver... you're just not cut out to be a mime! also... you're always wearing the same thing, and, my mates and i think u smell a bit. so, get a wash, haircut (falador in case you get lost) and go down the job centre!

Me and my freind were talking and decided to ask you a few questions that have been puzzling us...


Here they are:
1. Can you talk? Or since talking normally comes first can you read or write?

Goodness gracious, how does it bore you day by day, hour after hour standing there in that one spotlight educating players how to do mime tricks?..It would be a slap in the knee to meet you in the wilderness, Mime... 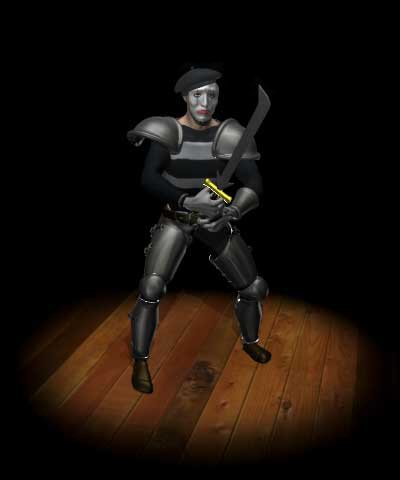 I really love being a mime in real life.(I entertain my class)But i have never gotten a chance to meet you.Hear are my questions:
1.What inspires you and first inspired you to be a mime?
2.Why don't you visit me?
And 3.How many people like your miming?