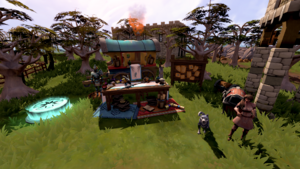 May's Quest Caravan, also known as the Quest Point Shop,[1] is a members-only reward shop run by May, released on 24 September 2018. It can be found near the Champion's Guild, just south-west of the Varrock lodestone.

The shop has three different reward tracks to which players may allocate quest points. Players can buy multiple tiers of a reward track at once by clicking the highest reward tier wanted and buying that, instead of the player individually buying all rewards up to the reward purchased. Players with a quest point cape will be able to unlock all but one reward at a time. Players can change the allocation to another track to gain access to the rewards of that track, but they will lose access to the rewards of the track that they switched from. Players are also able to reset their track progress; however, this can only be done once a week.

Having unspent quest points prompts the following message upon logging in: Visit May's Quest Caravan near Varrock Lodestone to see what you can unlock with your Quest Points.

General rewards are received from May when reaching certain quest point milestones. These are all one-time rewards.

Combat Track consists of the Armour of Trials, a hybrid tier 25, 50, or 75 armour set, depending on the player's level. Its special effect is that whenever the player dies whilst fighting a quest boss, each component of the set will reduce 1% of damage from said boss per death, up to a total of 5% per piece.

Along with the outfit, the player can also unlock Vanquish, a tier 75 weapon which increases damage dealt to quest bosses depending on the player's deaths. Per death, it will grant an extra 5% damage when using the weapon, up to a maximum of 25%.

Pet Track consists of unlocking the Lorehound pet and additional bonuses to it. It can be upgraded to carry around emergency quest supplies, change its appearance, increase area loot range and increasing drop rates for lore books. The benefits of the Lorehound will only work in its normal companion form - overriding familiars will not provide Lorehound perks.

Hub Track consists of upgrading the quest hub itself.

Below are the items that the chest can currently hold. Items are automatically added to the chest after completing quests, and using them on the chest is unnecessary. Items that are currently in the bank or inventory can be added to the chest when the item is dropped or destroyed. The bank 'Clean Up' filter will identify some/many of these quest items; the player however may need to search the bank to find them.

Interestingly, the storage chest allows players to retrieve items which previously could not be reobtained after quest completion, such as the plague jacket, plague trousers, and demonic sigil, or items which could not be obtained at all on some accounts due to choices made during a quest, such as Carnillean armour. The availability of Hazeel's mark however depends on the choice the player made during the quest.