From the RuneScape Wiki, the wiki for all things RuneScape
(Redirected from Max Cape)
Jump to navigation Jump to search
The Old School RuneScape Wiki also has an article on: osrsw:Max cape
This article is about the item. For the achievement, see Max Cape (achievement).
For combined cape and hood, see hooded max cape.
Item JSON: {"edible":"no","disassembly":"no","stackable":"no","stacksinbank":"yes","death":"reclaimable","name":"Max cape","bankable":"yes","gemw":false,"equipable":"yes","members":"yes","id":"20767","release_date":"3 May 2011","release_update_post":"Capes of Distinction","lendable":"no","destroy":"Drop","highalch":false,"weight":0.453,"lowalch":false,"tradeable":"no","examine":"A cape worn by those who've achieved 99 in all skills.","noteable":"no"}

The max cape is a cape available to players who have attained at least level 99 in all 28 skills. It is sold by Max in Varrock and by Elen Anterth in the Max Guild for 2,772,000 coins. It has an emote which shows off the player's expertise in each skill. The minimum total level a player needs for max cape is 2,772. When purchased, it comes along with a corresponding hood. The minimum amount of experience required to wear this cape is 388,003,148‬.

Equipping the cape unlocks the Maxed [Name] title, which has the same requirements as the cape. This title can be used without wearing the cape once unlocked, and will re-lock when the cape is unable to be worn. The cape also offers a teleport to the Max Guild, and unlocks the Max guild teleport magic spell.

The Max cape and Completionist capes have the second highest stats for an All-class cape, beaten only by the Igneous Kal-Zuk (although it lacks a life point bonus and provides a lower prayer bonus). In addition, the following capes provide higher individual bonuses than the Max cape with their respective stats: 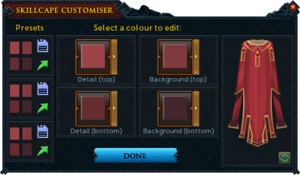 The colours of a max cape can be customised by using the option in the right-click menu of the cape. In the Skillcape Customiser interface, players have the right-click option on the either of the four colour palettes to get or set a certain colour via the HSL colour algorithm (hue, saturation, and luminosity).

The selected perks are applied on any cape the player is wearing, including cape-slot items that are not actually capes. The exceptions are capes that have their own perks (skillcapes, master skillcapes, and expert skillcapes), as their own respective perks take priority. If you become ineligible to wear the max or completionist capes, due to a new skill being released, the perks will stop applying until you can wear it again.

Since the perks are shared across all capes, the player cannot add different perks to the max and completionist capes, and if the player owns more than one of each they will all have the same set of perks. However, an Expert cape of Accomplishment (which can hold up to two skillcapes from their respective group of skills) may have different perks, which are only accessible when wearing that specific cape.

The cape used to grant the perk cannot be retrieved, which means that switching perks effectively costs 99,000 coins for a regular skillcape, and 120,000 coins for a master skillcape. For a list of perks see this listing.

The following table outlines the cape emote describing how the various 28 skills are incorporated.