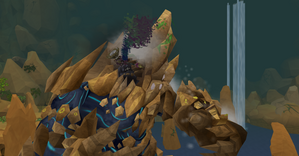 Vorago's eye poked out with the maul of omens

The maul of omens is an ancient weapon created to defeat Vorago. It is the only weapon that has ever been used to defeat him. As such, Vorago destroyed the maul and stored each piece within his body. The maul is reassembled during fights and is required to complete them.

Role in the fight[edit | edit source]

When the maul is created, it will prompt the message You have successfully created the Maul of Omens. Wait for the moment of weakness to strike Vorago down! During the final phase, if any piece of the maul is in the inventory, the player holding the piece will receive the message The weapon component comes alive and bleeds you whilst it isn't reformed!, and they will be dealt 100 damage every tick. This damage does not stack with multiple pieces of the maul; it will always be 100 damage. The effect can be cleared by dropping the piece or creating the maul. If the maul is used before Vorago is pushed far enough, it will prompt the message Nearly there, force Vorago back to finish him off the edge! Unlike most items, if the maul is dropped, it will be visible to all players immediately.

The maul cannot be equipped; instead, the left click option is "Finish him!", and this option is used when Vorago is at the edge of the platform to finish him off.

Mauling Vorago is required for the following: