From the RuneScape Wiki, the wiki for all things RuneScape
Jump to navigation Jump to search
Not to be confused with runecrafter robes.

Master runecrafter robes is an experience-boosting set earned from The Great Orb Project inside the Runecrafting Guild. The complete set consists of four pieces: a hat, body, skirt and boots. Each piece can be purchased for 15,000 Runecrafting guild tokens from Wizard Elriss in the Runecrafting Guild, for 4,000 Runespan points from Wizard Rinsit's store, or for 500 thaler from Stanley Limelight's store, so an entire set will cost 60,000 tokens, 16,000 points, or 2,000 thaler. There are no requirements to wear the robes.

Any full ethereal outfit allows the player to benefit from the Master runecrafter robes' experience boost, as long as the robes are in the inventory, bank, player-owned house, or Diango's Holiday item and outfit retrieval interface.

If any parts of these robes are lost, they may be reclaimed from Diango for free. 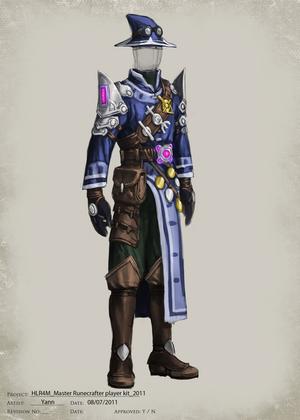