From the RuneScape Wiki, the wiki for all things RuneScape
(Redirected from Master camoflage outfit)
Jump to: navigation, search

All 15 pieces required to make the master outfit can be created using the Invention skill, costing 3,600 camouflage fragments for each piece, for 54,000 fragments in total. Obtaining all of the outfit pieces is required for completing the Slivers of Camouflage achievement. 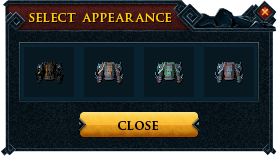 Below is a list of NPC's the Master camouflage outfit's auto-pickpocket function does not work on: