Maple trees can be found in these locations: 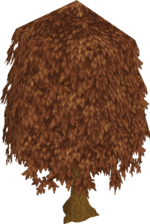 The old look of the Maple tree.

Free players can only chop Maple Trees at the Daemonheim Peninsula resource dungeon. The most efficient way to bank the logs is to use the ring of kinship to teleport to Daemonheim and then run back to the mysterious entrance. There is also a ship nearby that can sail to Al Kharid where there is a bank near the dock.

Respawn time does not depend on world population and Maple Trees will always respawn in 53 seconds.