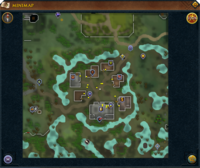 A single map chunk can be seen loaded on the minimap.

Map chunks, also know as loading zones, are a memory management game mechanic used to load sections of the RuneScape world via a process known as chunking. A map chunk consists of 1502 game squares; an area of 22,500 tiles.

Instanced areas are areas separate from the main game world. When an instance is created, the server duplicates one or multiple chunks and loads them in this area, consisting of an instanced void that counts 73 chunks per server. Instanced areas are used for activities such as bossing and quests.