From the RuneScape Wiki, the wiki for all things RuneScape
Jump to: navigation, search
This article is about tree discovered in A Fairy Tale III - Battle at Ork's Rift. For item used in Meeting history, see Mango tree seedling. 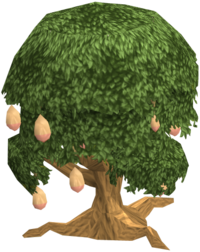 Mango trees are a type of tree released on 13 May 2010 with the A Fairy Tale III - Battle at Ork's Rift quest. Players go there during the quest to collect a Mango for use in tricking Gromblod into leaving the Enchanted Valley. It grows on Ape Atoll, just north of the Ape Atoll Agility Course. Players first reach it by using the Fairy ring code CLR after obtaining it from the Wood Dryad. There is a fallen log between the Mango tree area and the agility course, but it is blocked by mud, and can be cleared from both sides. After this, it can be freely traversed, however a player must wield a Ninja monkey greegree (but it must be a little ninja) to pass through. If players attempt to pick a Mango before or after completing the quest, a "magical power" prevents them from doing so. ("A magical force prevents you from picking this fruit") This tree cannot be cut down or interacted with in any way, apart from picking a Mango during the quest.