From the RuneScape Wiki, the wiki for all things RuneScape
Jump to navigation Jump to search
Item JSON: {"edible":"no","disassembly":"no","stackable":"no","stacksinbank":"yes","death":"always","name":"Magic training dummy","bankable":"yes","gemw":false,"equipable":"no","members":"no","id":"31772","release_date":"11 August 2014","restriction":"microtransaction","release_update_post":"Treasure Hunter – Elite Training Dummies","lendable":"no","destroy":"Are you sure you want to destroy your Treasure Hunter prize? You cannot reclaim it.","highalch":false,"weight":2,"lowalch":false,"tradeable":"no","examine":"Deploy this to create an elite training dummy, on which to train your magic skills.","noteable":"no"} 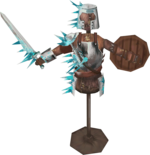 When deployed, a magic training dummy will appear. It can be placed down in most locations excluding banks, the wilderness and certain minigames. The combat level of the dummy is the owner's magic level with a maximum combat level of 99.

The dummy can be attacked and defeated up to 5 times. For each defeat, the player receives experience based on the combat level of the dummy in Magic and/or Defence (depending on your settings) and Constitution. After the 5th defeat, the dummy is destroyed. Defeating a dummy the fifth time provides increased experience.

The dummy can be attacked by other players. They can deal up to 10% of the damage necessary to kill it and will receive 10% of the experience that they would have gained if they had owned it. The owner's experience is not reduced. The experience is given once the owner has defeated the dummy. Experience gained from the dummy is scaled to the attacker's current combat level and is based on whatever combat style is chosen. If the owner is not doing any damage to the dummy other players cannot do damage. At level 99, the player who placed the dummy will gain 13,673 combat-style experience along with 4,511 Constitution experience.

The dummies have a few restrictions:

Due to the above mentioned restrictions, this revolution++ bar is more optimal to use for faster afk kills: