Magic logs are logs that can be acquired using the Woodcutting skill from magic trees, or by bringing cursed magic logs into Gielinor. Cutting magic trees requires a Woodcutting level of 75 or higher and yields 250 Woodcutting experience per log cut.

Players can burn these logs at level 75 Firemaking, giving 303.8 Firemaking experience or 309.5 if adding magic logs to a bonfire. A total of 338.1 experience can be gained per log while adding to a full bonfire with flame gloves and ring of fire. When lit, they burn for approximately 5 minutes and 30 seconds.

A final use for magic logs is to use them in pyre ships, or use sacred oil on them to create magic pyre logs, which can be used in the Shades of Mort'ton or with vyre corpses in the Columbarium. These activities yield Prayer as well as Firemaking experience.

After completing the elite Tirannwn achievements, players can persuade Coeden once a day to give a random set of 28 elder, magic, or yew logs, or a random combination thereof.

One hundred magic logs can be looted, one time only, from Movario's base after the While Guthix Sleeps quest.

Firemaking with an augmented crystal tinderbox or Pyro-matic will grant 21 item xp per log or 588 item xp per inventory of 28 at a bonfire with 5+ players.

While magic logs are available in free-to-play, magic trees are not. The King Black Dragon drops magic logs, but only on members worlds. Therefore, the only way for a free player to obtain them is through trading. While magic logs are unobtainable in f2p Ironman Mode, they can buy magic shieldbows and magic shortbows from Valaine's Shop of Champions if they have 33 quest points. 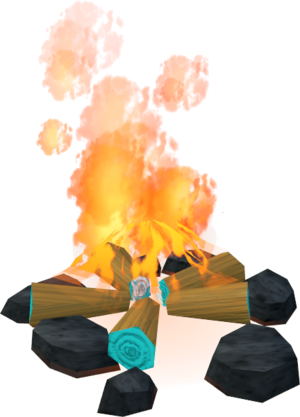