From the RuneScape Wiki, the wiki for all things RuneScape
(Redirected from Magic carpets)
Jump to: navigation, search
The Old School RuneScape Wiki also has an article on: osrsw:Magic carpet
This article is about the transportation system. For other uses, see Magic carpet (disambiguation).
Not to be confused with rug. 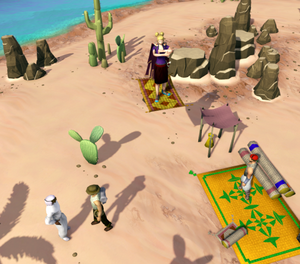 The magic carpet is a mode of transportation in the Kharidian Desert. The magic carpet system is operated by rug merchants. Carpets can be used to travel to any unlocked destination for a fee of 1,000 coins. Completing the Rogue Trader miniquest reduces this cost to 500 and additionally wearing an activated ring of charos to 375 coins respectively. All magic carpets except for the one located at the monkey colony can be used to travel to any other destination. The monkey colony carpet only travels to South Pollnivneach and Al Kharid. 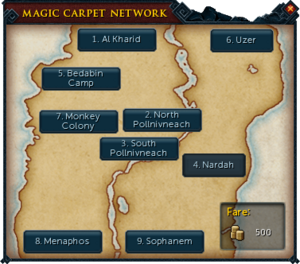 The interface for the magic carpet network.

A player riding a magic carpet to their destination prior to the removal of slow travel.