The magic butterfly net is a piece of equipment that requires level 17 Hunter to wield. The net provides exactly the same abilities as an ordinary butterfly net, but greatly increases the player's chances of capturing butterflies and implings. The player still needs either the butterfly jar or impling jars to capture the respective creatures.

If you receive the message you need to unsheath your butterfly net to catch implings, or a message saying you need a butterfly net, right-click the minimise button on your action bar and select toggle-sheathe. 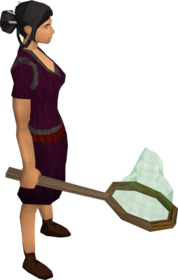