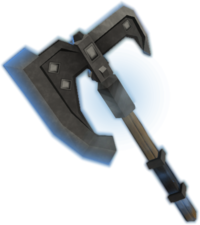 Magic axes are a type of monster in the form of a floating battleaxe. They are combat level 74 and due to their aggressiveness and high life points, are good training for medium-high level players. Magic axes can hit quite often, so food is recommended.

They can be found in Taverley Dungeon, as well as deep in the Wilderness inside the magic axe hut (lockpick required).

Magic axes in a strange room under Taverley.