From the RuneScape Wiki, the wiki for all things RuneScape
(Redirected from Mage arena)
Jump to: navigation, search
The Old School RuneScape Wiki also has an article on: osrsw:Mage ArenaThe RuneScape Classic Wiki also has an article on: classicrsw:Mage Arena
This article is about the wilderness location. For the Al Kharid location, see Mage Training Arena.
For the music track, see Mage Arena (music track).

The Mage Arena (Minigame) is a Pay-to-play minigame in which the player must travel to the Mage Arena in the deep Wilderness and fight Kolodion, the master of battle magic. To fight in the arena requires level 60 Magic (boosts do not work), and the ability to kill increasingly difficult forms of Kolodion using only magic. It is also helpful to have 37+ Prayer, so you can use Protect from Magic. Whilst the minigame is Pay-to-play, the area, including, bank and rune shop are Free-to-play.

Its bank is a hotspot for player killers to restock their supplies.

The Mage Arena itself is not safe from player killers, although the banking area is. When you are fighting Kolodion you ARE NOT safe from PKers, however, it is a single-combat zone so as long as you are fighting Kolodion you should be fine. Regardless, it would be wise to complete this activity on a world with a low population, to minimise the chance of an encounter with a PKer.

It is strongly recommended that a player bank all of their items first and then travel to the Mage Arena. This way, if a player dies for whatever reason on their way to the arena, they won't lose valuable items.

The Mage Arena bank is very useful for restocking on food when you're training agility at the Wilderness Agility Course. 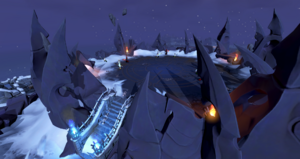 Dare you get on?

Players with level 60 or higher Magic can begin the Mage Arena. Head out into level 53 Wilderness to start, but watch out for player killers (Using the Ardougne teleport lever or Edgeville teleport lever to teleport to the Deserted Keep is recommended to minimise the time taken getting there).

What you should have:

Just north of the Mage Arena is a little broken down house. Players should approach this house warily, as there might be player killers waiting.

Cut down the webs in the house. Pull the lever on the wall of the house to be teleported into a small cave (commonly referred to as the Mage Bank).

In here is a rune store run by Lundail, a bank run by Gundai, and Kolodion, the NPC who must be talked to in order to start the Mage Arena minigame. Kolodion will also be fought during the minigame, so just talk to him to begin. After a long dialogue, you will end up fighting him. As long as you are in the cave, you can teleport and you are safe from player killers. Remember that the arena is considered the wilderness, and you may not teleport.

Before going out of the arena, make sure no PKers are nearby. If you seem like a good target to them, return to the Mage Bank lever as quick as you can. Be sure to pray against whatever attack style they use against you. 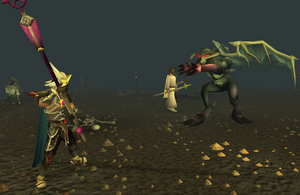 Kolodion changes into 4 different forms as the fight progresses, and will always attack with magic and therefore the Protect from Magic prayer should be activated for all of his forms if available, as it will prevent half of his damage. As each form changes, the life points of the form increases, but the battles are fairly easy to win.

At the start he appears in human form, and should not be challenging to defeat. After defeating this form, he will transform into an ogre, a troll, a dark beast and finally a black demon. Multi-target spells will NOT hit the other mages in the arena, so don't worry about your ability setup too much.

If the battle turns sour you can escape the arena and restock at the nearby bank, use the bridge from the centre of the arena, on the west side of the arena, to the outer ring. On the north side of the ring is the staircase to the north of the ring. You will find yourself outside the arena, next to the small hut with the lever that teleports you to the bank. Talking to Kolodion again will resume your battle at the point you left it, although his life points will be fully restored.

A player receiving a Guthix cape 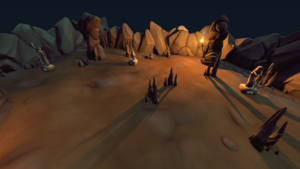 Once Kolodion is defeated, the minigame ends and players will be teleported back to the bank, talk to Kolodion and he will congratulate you on a fight well fought. He will then ask players to choose their God.

To do this, head into the nearby 'Sparkling pool' and you will come out in another room near the Chamber guardian. Head past him into a larger chamber with three god statues. Now choose your God and pray at the relevant statue. Players will then receive one of the God capes, determined by which god is prayed to.

After receiving the cape, head back and speak to the chamber guardian to receive one of the God staves, which will be the partner to the cape. To obtain other God Staves, talk to the chamber guardian who will charge 80,000 coins as a fee for the staff. The capes do not amplify the power of Divine Storm, but provide an excellent magic bonus. You can obtain multiple capes of every type. If you happen to lose your cape or choose to destroy it, you can pray at a statue to obtain another. To unlock Divine Storm and use it outside of the arena, it must be cast 100 times inside the arena. Note that Divine Storm can miss, but as long as you have spent the runes for 100 casts, you will be granted the spell. After getting your cape and staff, go back through the pool, then pull the lever to go back outside. You can enter the Mage Arena from there and start unlocking Divine Storm.

If you want to charge Divine Storm, you have to cast it 100 times inside the arena. During the time that you are fighting Kolodion, you are free from all player killers, but now, you are vulnerable. While in the mage arena casting the spell, you will not be attacked by the battle mage of the God whose cape you are wearing; however, they will retaliate just like the other battle mages. The others will attack you, but it is a single combat zone, so if you are fighting a mage you are safe. It is recommended to bring prayer potions and food, as both you and the opponent will be casting the god spells, which can hit up to 850. Once you have charged Divine Storm (cast it 100 times) you will receive a message saying you are now able to cast the spell outside the arena. Congratulations!

A good strategy for unlocking the spell quickly is using a magic wand, as they have the highest attack speeds of all magic weapons. Since you can simply let the spell splash and still be counted as part of the 100 casts required, you can equip ranged armour to lower the amount of food required. For the same reason, one can bring 500 air runes to have just the exact amount to unlock Divine Storm. This can also facilitate calculating how many more casts are required to unlock the spell by dividing the number of runes left in your inventory by 5. The Guthix God cape is probably the best to bring, as the Guthixian battle mages are near the entrance to the arena and do the most damage of the three.

It is also advised that you use Legacy Mode on mages as the spell consumes runes on each turn instead of only once per kill when using abilities. 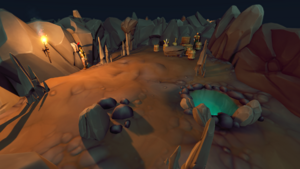 The Mage Arena cave's bank (known as the Mage Bank) is run by Gundai. The best choice is after you kill each form, go to the level in front of the entrance and exit the arena, then go back in and get more food from the bank in the Mage Arena and stock up on food and the form you left on will be fought again even if you leave.

When you first enter the Mage Arena Cave, you may want to visit the shop. Lundail's Arena-side Rune Shop is run by Lundail and supplies runes.

After stepping into the Sparkling pool, there is another shop run by the Chamber guardian. He sells the 3 god staves for 80,000 coins each. There is no limit to how many you can buy, so you can obtain more than one of each staff.

The Mage Bank is a refuge from PKers, who often kill those trying to reach the arena. Those players often use spells from the Ancient Spellbook, such as Ice Blitz or Ice Barrage, due to the rune shop nearby (Lundail).

Players training in the arena should be aware they can be attacked at any time between leaving the bank and entering the inner part of the arena. One would be wise to bring food such as rocktails and an extra prayer potion to maintain the Protect from Magic prayer.