From the RuneScape Wiki, the wiki for all things RuneScape
Jump to: navigation, search
This article is about Mother Mallum's host. For other uses, see Lucy (disambiguation).
Lucy? (edit)? (edit) 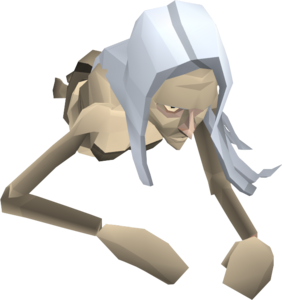 Lucy is an aged and ragged woman who is used as human host by Mother Mallum up until the Salt in the Wound quest. She is discarded when the group led by the player confronts her directly, and Mallum begins to use the Player's body as a host. Up until that point, she had been Mallum's host for millennia.[1]

After Mallum is killed, the player may speak with her and she replies in a childlike manner, referring to her "daddy" (if player is male), or "mummy" (if player is female), and saying she had a nightmare but that she can't see because her eyes are still "sleepy". Like all who have been controlled by slugs, Lucy had almost no recollection of what happened while she was being controlled, she believed she was still a child even after all these years and was merely having a nightmare. Lucy perishes shortly after the player either tells her the truth about what happened, or lies to her in a comforting manner and tells her it was all a dream. Eva comes to the conclusion that Lucy was taken by Mallum when she was only a child. Lucy has spent millennia in a semi-conscious, nightmare-like state from which she couldn't awake.

Lucy's theme
The music that plays when talking to Lucy.