From the RuneScape Wiki, the wiki for all things RuneScape
Jump to: navigation, search
Lucky Zamorak godsword (passive)? (edit)

The Lucky Zamorak godsword (passive) is created by using a Lucky Zamorak godsword on the altar in K'ril Tsutsaroth's room. This process can be repeated to turn the sword back to normal. If this sword is destroyed, it can be reclaimed from Diango, albeit in its non-passive version. The passive effect replaces the special attack. 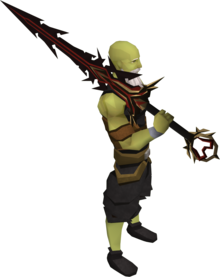