From the RuneScape Wiki, the wiki for all things RuneScape
Jump to navigation Jump to search
This article is about the Hallowe'en 2018 manifestation. For the Mahjarrat this manifestation is based on, see Lucien.

Lucien is a giant manifestation of the deceased megalomaniac Mahjarrat that emerged from the chaotic rift during the final phase of the 2018 Hallowe'en event, 'Til Death Do Us Part.

While the real Lucien died at the Mahjarrat Ritual Site at the claws of Sakirth and the Staff of Armadyl during Ritual of the Mahjarrat, this manifestation of Lucien was created through a combination of Xau-Tak's power and Moia's memories of her greatest fear while she was trapped in the rift. [1] Under the effects of the rift, she was exposed to the taunts of said manifestation, which included reminders of her failure to him.[2] 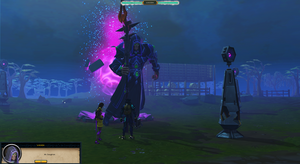 Lucien appears via the portal.

Deaths during the fight are safe, and all damage players deal to Lucien is at least 4000 to 5000 damage per hit regardless of their equipment or attack style.

In addition to his primary melee and magic attack, he has several other attacks as well: 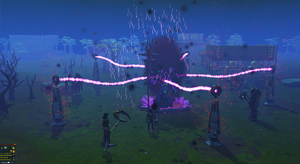 Lucien is killed by the combined efforts of the player, Moia, and the riders.

Lucien will also occasionally teleport to one of the pillars in order to channel power from the rift, rendering him immune to any attack. This will show the message: Lucien is immune to damage whilst he channels power through the rift, try attacking the pillar he is channelling from. The player is required to destroy the rift connection he is channelling from in order to progress with the event.

Failure to defeat him within 15 minutes will result in the manifestation despawning, and the following message: Too much time has passed and Lucien's manisfestation has been dragged back into the rift... For now. He has left behind some loot. The player will still receive their rewards, however.

After defeating him, a cutscene plays where the player, surrounded by Moia, Death, War, Famine and Pestilence, will destroy him. 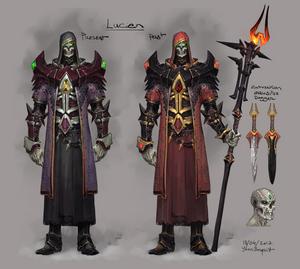 Lucien's staff is unlocked the first time that he is destroyed, and corrupted energy once per spawn time, including the first fight.